I have a confession to make. I have never until the day of this event driven a Lamborghini of any description. As a petrolhead I feel this is a massive, massive oversight on my part and I feel a sense of guilt about even calling myself a petrol head now this news is public although perhaps the story of the day I drove at over 200mph might appease some of you…

As has already been well documented on these pages, a few years back I was lucky enough to win a car from BOTB. This year they gave away their 200th car and as part of the 200th celebrations I was invited to head to Bruntingthorpe to spend the day with the BOTB team, a few journalists and another previous winner.

The day was being run by Ecurie25 on BOTB’s behalf and our first stop was of course a briefing. Until this point I don’t think I’d considered the implications of travelling at 200mph in a car I’d never driven but between the instructors they made sure we were aware of the gravity of the situation! To put it in simple terms 200mph is roughly 90 metres per second!

The format of the event was simple, take a lesser Lamborghini round the track to see how it feels, learn the track and prove to the instructor you are capable of finding the brake when told to. When I say lesser Lamborghini it was still a LP570-4 Performante which can only be called ‘lesser’ when in the presence of a car like the Aventador we were to try and break the 200 mph barrier in.

184 mph later and the instructor seemed reasonably happy I wasn’t going to get him killed on the 200 mph run.

So a bit of waiting around and chat with a chap called Tim who turns out to be quite famous in the world of YouTube and cars ( Shmee150 ) and the orange beast pulled back into the pit area.

At this point I was suddenly filled with dread. I was up 10th out of 12 drivers and all 9 before me had reached 200 mph. It suddenly dawned on me that the tiniest mistake could leave me being “the guy who did 199mph”. This REALLY couldn’t happen! A deep breath and it was time to get going…

So, success. Sadly not the 203 mph the instructor called but a highly respectable 201 mph. I’d done it!

Finally the last 2 drivers did their runs and we all congregated to take the obligatory press shots ( we could hardly refuse!) and for a small prize giving where Will and Rupert gave us each an orange Aventador model with a 200mph plaque on it. 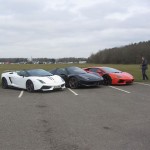 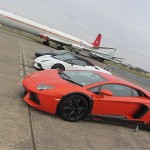 As if I wasn’t busy enough already

This site uses Akismet to reduce spam. Learn how your comment data is processed.